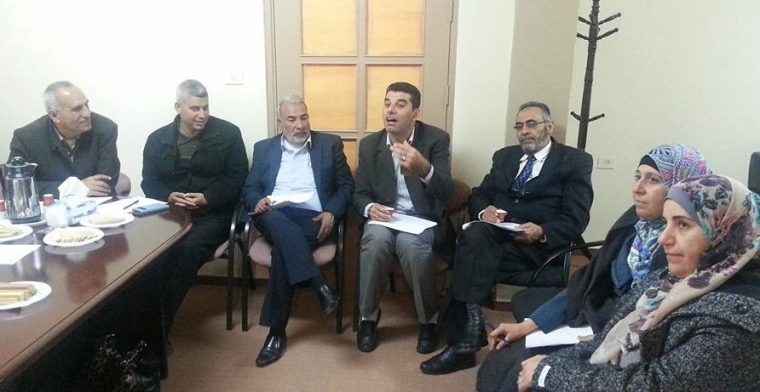 Within the framework of "Enhancing Palestinian Women's Participation in Public and Political Life" program, AWCSW conducted a workshop to discuss Media Strategy Planning and presented a study on the challenges and obstacles women encounter in the area of social work. This program and workshop is funded by UN Women/FGE.
The workshop was supervised by the head of AWCSW Mrs. Rabeha Diab and attended by Mr. Hisham Kahel, Executive Manager of Central Elections Commission, representative of the Ministry of Local Governance, representatives of Ministry of Women’s Affairs, representatives of Ministry of Information, Women’s Affairs Technical Committee as a representative of partner women’s associations, and member women at local bodies and council. Also, among the attendance were journalists at Al-Hayah newspaper, Palestine Today, Zamn Press, Alhaya Aljadeda, Watan TV, and Radio Raya FM.

The Informative and Researcher, Mr. Omar Nazzal, emphasized on the importance of media strategy planning as it provides indicators by which the state of media can be analyzed; using tools to gather information and deduce results and recommendations. Mr. Omar also pointed that strategy planning is a skill depicts a successful leader and a map shows the work and efforts performed by effective women’s institutions.

Additionally, Mr. Omar asserted the importance of publishing information guidebook to manage the work of women’s institutions. Some participants suggested that women’s issues should be broadcasted and published in general broadcasts and newspapers rather than in channels specified for women’s affairs. Also, they suggested having national strategy and focus on popular media as it has the power to influence popular opinion.
Nariman Ouda, Head of Gender Department at the Palestinian Ministry of Information, said: “our concern as Palestinians is to focus on media in general in which gender issues are addressed with sensitivity.”
The analysis of Media strategy planning clarified that media is relevant to regulations ratified in The Declaration of Independence in 1988, the main law, Press and Publication law, and annual reports published by women’s departments in ministries and institutions. However, the analysis also showed that media laws are not realistic; rather, old and unpractical due to the penal code that prevents free media practices.
Dr. Khalid alfaqeeh presented an executive media plan supports women’s participation in political and social life and takes into consideration the state of media in Palestine. Dr. Khalid suggested establishing media forum that is specialized in focusing on women’s issues. He also suggested utilizing TV and Drama and popular media to influence public opinion.
The Researcher, Mrs. Shada Oudah, presented a research on the challenges of women political and public life participation in Palestine. She pointed to a number of unexpected statistics and percentages that are revolved around engaging women in informative, political, and leadership positions.
Mr. Alaa’ Ayesh, representative of the United Nations Entity for Gender Equality, encouraged cooperation and networking to achieve mutual objectives and promotion of the role of partner institutions that should be powered to analyze media. He also put emphasis on employing available human resource in partner institutions to support women’s affairs and achieve equality and human rights.
The workshop enriched with discussion that emphasized in general on improving the current status to have better-off results in all aspects.