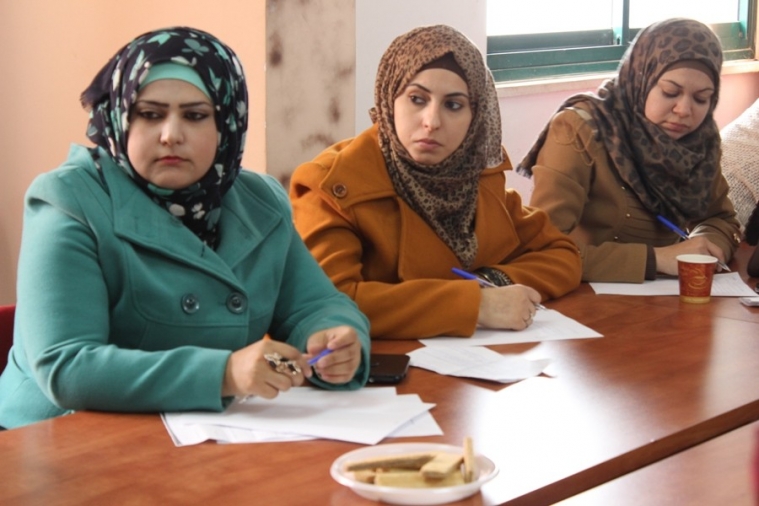 AWCSW conducted an evaluative meeting for the second year of "Enhancing Palestinian Women's Participation in Public and Political Life" program. The meeting was attended by university female students that are activists in the targeted villages of the program;  namely, Beit-Sira, Kharbtha Bani Harith, Beit ‘Ur, Saffa, and Kharbtha al-Misbah in Ramallah and Al-Bireh Governorates, as well as Al-Yamun, Burqin, Fahme, Kufr Ra’i, and Al-Sila al-Harithiya in Jenin Governorate. The evaluation was carried out by consulting services company and under the supervision of the Supervisor Mrs. Nahid Fraig that discussed with the girls the main advantages they obtained from the training program and the objectives and achievements that was reached during it.

Additionally, Mrs. Nahid discussed also with the girls the positive changes they have affected by throughout the training and other experiences acquired and utilized in supporting their villages. Mr. Nahid also conferred with the girls about their success stories they developed by the support of AWCSW.

Mr. Nahid finalized the meeting by encouraging the girls to point out the main challenges and obstacles they have encountered to make suitable maintenance for the up-coming programs. Mrs. Nahid also inquired the girls about their willingness to participate in future programs and trainings of AWCSW that aim at empowering women’s participation in their societies.