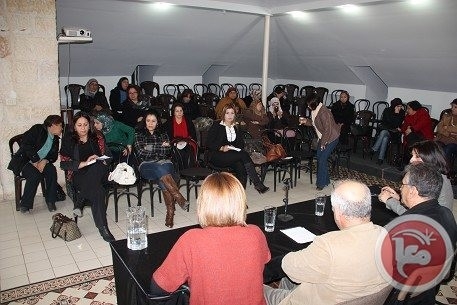 AWCSW Directorate General of Public Relations and projects, seminar entitled "The Reality of Palestinian women" in terms of the Personal Status Law and the Penal Code within the program "Hand in Hand for Palestine, free from violence," the third stage and funded by the Representative Office of Norway to the Palestinian National Authority, which designed by the Director-General of the General Administration of relationships and projects writer Salim wasp, in the presence of Head of Department of Legal Affairs in the Ministry of Women's Affairs, "Ismail Hammad," and a representative of the Department of Women in Jenin "Mervat Afif," and watc "faith still," the mufti of the province "Mohammed Abu al-Rub," as the audience included local committees against violence in sixteen villages in Jenin.

In his speech, thanked the Head of Department of Legal Affairs in the Ministry of Women's Affairs, "Ismail Hammad," the Union and stressed the need to claim legal rights of women in order to reach legal controls help to promote the Palestinian society in general and Palestinian women, especially the need to make women aware of their right to a legal order to activate the law and sovereignty, as appropriate with women's rights.

The ceremony included a speech Grand Mufti "Muhammad Abu al-Rub" Pamper through interviews and stories from the Koran to demonstrate that the Islamic religion equitable for women's rights, and of their place in society, and that gave her rights and freedoms, including commensurate with كينونتها.

It welcomed the lawyer and legal adviser "Susan tractor" theme of the seminar and considered it a very important step and a positive contribution in the liberation of Palestinian women from societal constraints imposed on it, which is paid sometimes her price her because of the so-called "honor crimes", which constitutes a social phenomenon serious worry Palestinian society as a whole, and hinder progress, also pointed to the need for the amendment to the existing laws in line with international conventions and principles concerning the rights of women, especially in the personal status laws, protection of the family and that Palestinian women suffer from severe prejudice the outcome.

At the end of the episode has been open discussion of running Facilitator: Dr. Issam Abdeen out the recommendations of the claim by lifting and forwarded to decision-makers even be considered formally, but efforts are fruitful, and finally thanked the audience as partners in the march, which supports women legally.