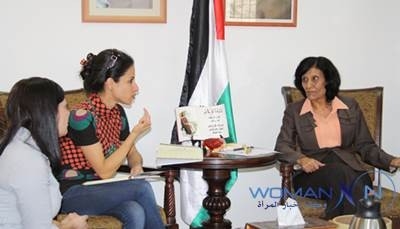 In the presence of the representatives of AWCSW and Sharek Youth Forum, the Minister at the Ministry of Women’s Affairs, Ms. Rabiha Diab, Discussed the needed mechanisms to form a committee intends to empower women’s role in political and social life, particularly Al-Quds University female students. The formation plan is developed in order to strengthen women’s abilities to involve in local bodies and leading positions. This has come within the framework of “Enhancing Women’s Participation in Political and Public Life” program that is funded by UN Women/FGE.
Additonally, Ms. Rabiha Diab presented the supportive and technical role of the Ministry of Women’s Affairs (MoWA) in the advocacy, lobbying, and training fields; particularly during the phase of evaluating and reviewing the development of the cross-sectoral national gender strategy of prompting gender equality and women’s empowerments 2014-2016 in accordance with international principles. Also, Ms. Diab stated the importance of the cooperation with all the ministries, bodies, and interested institutions. Ms. Diab added that the Ministry of Women’s Affairs (MoWA) has always directed its effort toward supporting women. Finally, Ms. Diab emphasized that TAWASOL centers has played a significant role in facilitating the work in the Governorates.
Ms. Mira Salamah, Project Manager at AWCSW, clarified the aspects of the two-year program which are mainly empowering female university students, member women in local councils, and female leaders. Also, Ms. Mira Salamah added that the program aims at linking women to their society and supporting researches that are revolved around promoting women’s participation in social and political spheres.
In addition, Ms. Laila Edeebes, Projects Manager at Sharek Forum, illustrated the importance of cooperation as well as national policies in enhancing women’s role in politics, society, media, and discussion making; wither they are university students or members of local bodies.
Mr. Sami Sahwail, Planning Manager at the Ministry of Women’s Affairs (MoWA), asserted that it’s essential to gradually develop an advisory committee, implement a joint procedure with TAWASOL centers, and design strategic goals in order to guarantee the program’s success.
Nevertheless, The Ministry of Women’s Affairs (MoWA) conducted today a workshop that was attended by Mr. Bassam AlKhatib, representative of the Ministry. The workshop targeted the Ministry employees and  discussed the first draft of the goals and policies of the cross-sectoral national strategy of enhancing gender equality and women’s empowerment 2014-2016 that is directed at enhancing women’s role in society, economics,  and politics.